Getting the Colors "Right"

As you may have guessed, I like to play with dichroic and opalescent looks in polymer. I have found the iridescent flakes are very useful when creating an opal look, but I have not been completely satisfied.  One thing missing has been color control.  I tried manipulating the background using metal leaf, alcohol inks, and glitters.  While I was able to get some lovely colors, I couldn't seem to control which colors I got, and where they appeared.  Obviously, it was time to experiment some more. 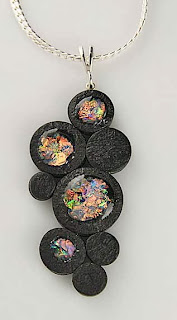 The pendant to the left demonstrates the use of the iridescent flakes on a colored background.  I like the effect of the smooth sparkle and color magnified by the textured black surrounds.  However, there is no real control of the color of the opals other than through the use of a colored background.  As you can see, the opals appear multi-colored.

Today, I'd like to share with you my latest iterations of faux opal.   I wanted to be able to create specific colors when and where I wanted them.  The trick, at least for me, turned out to be using alcohol inks, iridescent flakes and translucent liquid polymer to create a slurry. When baked on a metal leaf background, the slurry effect has depth, sparkle, fire and the colors I wanted.

Below on the right, are three pendants.  In the one on the left, I concentrated on a purple coloration.  I also included a small section of blue and yellow for contrast and interest.  In the middle piece, I focused on an overall blue, while in the piece on the right I used green and yellow coloration. 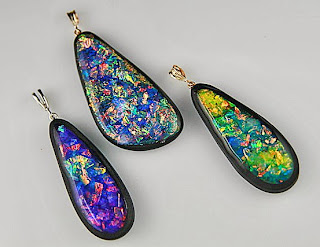 The last photo shows 2 pendants with my version of a "fire opal."   On these, the use of reds and oranges in the background as well as in the flakes seems to have added additional depth and inner glow. 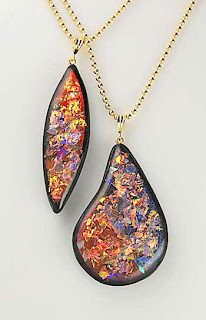 I'm really quite pleased with the direction these experiments are taking, and plan to play some more.

I'm also going to have to work on more natural looking settings, but that's a future project.
Posted by ~Kristie at 5:02 PM

~Kristie
Art and creativity are an important part of my life. I love making things - and I love to teach. I feel so fortunate to have found mediums which allow me to do both! I enjoy working in beadweaving, PMC, polymer and porcelain, though recently polymer seems to be taking more and more of my time and attention. If you have questions or would like to contact me, drop me a line: kyfoss@comcast.net I'd love to hear from you.

My classes are usually listed on the Workshops and Classes page. Due to the pandemic, classes are suspended for the time being. When conditions permit, classes will be resumed. Please check back to learn the status.
In the meantime, I will be offering a simple, fun monthly Polymer Clay challenge. If you have any questions or comments, please feel free to contact me at kyfoss@ comcast.net
From time to time, I also teach polymer classes at the Spectrum Art Gallery in Centerbrook, CT. The Spectrum Gallery has re-opened. You may visit the store in person, or you may check their website where many of my pieces are displayed for sale.
When they resume, our monthly polymer classes are held in the Social Hall of the Newent Congregational Church in Lisbon, CT. 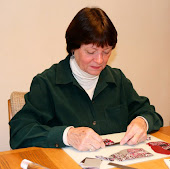 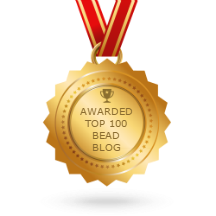